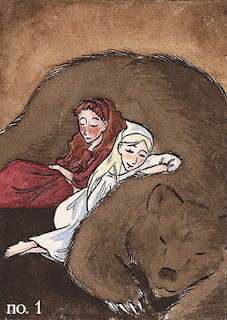 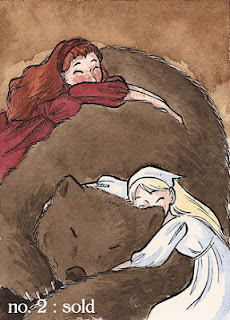 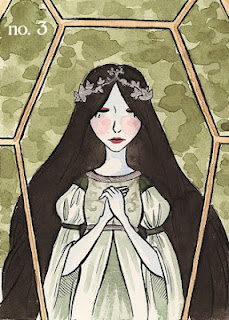 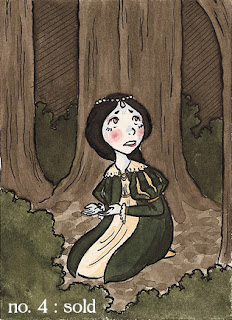 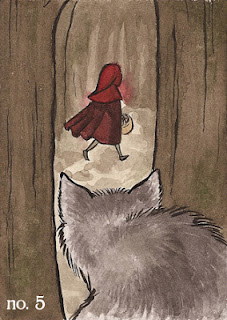 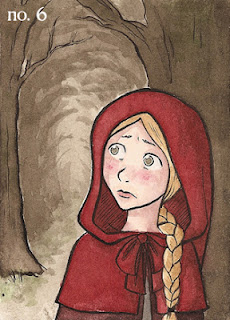 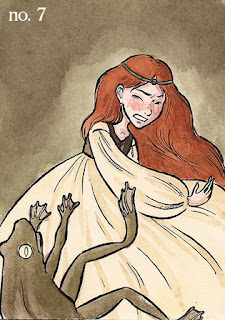 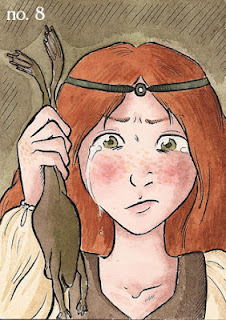 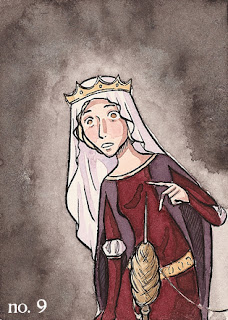 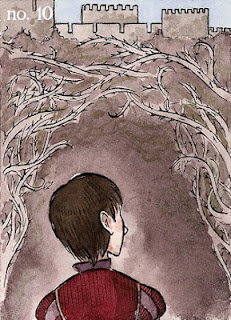 These are some art cards I painted to sell at Bristol Expo. Originally there were going to be 14, all based on German fairy tales (so no Beauty and the Beast), but I only had time for 10. Rapunzel and Cinderella are still to be completed.

1 and 2 are Snow White and Rose Red. I mentioned in an earlier post that I imagine Rose Red looking a lot like my sister because we used to play a make-believe game based on the story, recently she told me that she remembers it too.

3 and 4 are Snow White. I love painting her, I like to interpret the 'hair black as ebony, skin white as snow, lips red as blood' thing literally.

5 and 6 are Little Red Riding Hood. I tried to make her look German, and make the forest look like it could be a scary place, since it would have been back when the tale was written.

7 and 8 are The Frog King, or Iron Henry. That's probably my all-time favourite fairy tale, I always imagined the princess to be only 12 or so (I think because the frog addresses her as 'King's daughter, youngest daughter'), and I liked the traditional description of the prince as 'a king's son with kind eyes'. Also the version where she throws the frog against the wall is vastly superior to the kissing version in every conceivable way.

9 and 10 are Sleeping Beauty. I find that story pretty creepy, but it's got some nice imagery. In the version I was told the prince can only get through the thorns because the 100 years are up, and on the way though he can see skeletons of other men who've tried to get through and died in there. I'd like to do a bigger version of that some time.

I'd never tried selling originals at cons before, so I was pleased to sell two of them. I put the rest up for sale in my online shop.
Posted by Sarah Fogg at 03:16 1 comment: 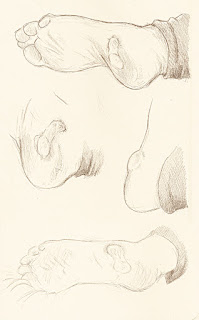 Yes, yes I sketched my blisters again. Look at the size of that thing! Wouldn't you want to record it for posterity? Originally it was much smaller, but it was on the sole of my foot, so walking around forced the fluid up the side and made it almost three times its original size.

It's weird to look at my toes and realise they've developed in the shape of my shoes. I'd rather have natural ones, I think.

In other news, I am so tired. I've been working a lot more hours at the tea room than I was contracted for. Not that I'm not happy to have more money, but there's a reason I only applied for part-time. We're hiring new people soon, so hopefully then I'll be back to my contracted hours and I'll have time to do drawing again. With any luck the Summer will be over early too, so I can stop being in such a bad mood.
Posted by Sarah Fogg at 00:07 No comments:

Email ThisBlogThis!Share to TwitterShare to FacebookShare to Pinterest
Labels: me, observational, pencil, sketches and doodles 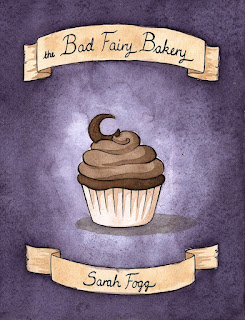 I wrote two comics for Inspired's newest anthology, Eat Me! (I was also very pleased to win the cover vote this time with my cheerful takoyaki.) The Mysterious Land of Under Noodle went into the anthology, so The Bad Fairy Bakery was printed alone and sold as a mini-comic at Bristol Expo. Since it's only 8 pages long, I thought I'd put up the whole thing for you all to read, like Patience is a Virtue. I hope you enjoy it! 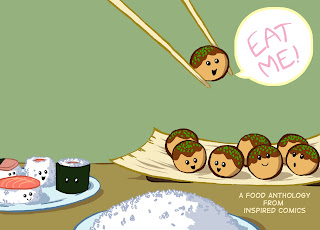 Here's a little preview from the latest Inspired anthology, Eat Me! I was very pleased to win the cover vote this time as well.

I was also really pleased with how my comic came out, since it was the whole reason we had a food theme. Sammy and I were eating at a noodle bar and I started making up a story about my wonton noodle soup, so we decided to do a food anthology so I could turn it into a comic (the other members agreed of course). I really like my character designs for this comic. 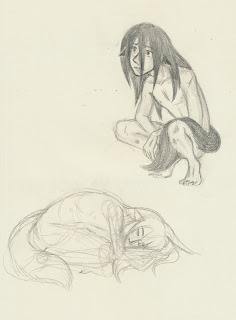 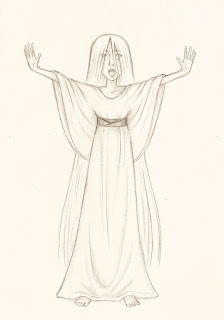 I've been doing quite a lot of work that's not ready to show, along with frantically getting ready for Bristol Expo this weekend while doing many, many shifts at a tea room, so here are some old-ish sketches I did in spare time instead.

I don't think Andersen has appeared on here before, but he's a shape-shifting cat who is found by Jessie in a forest, and seems to have been abandoned by his people for some reason. He's mute, but he does understand speech. (Although he doesn't speak English.) It never really comes up in the story, but he hooks his tail over his leg like that because when he was little someone trod on it.

You should all recognise Coda, she's in white because she's participating in a ritual.
As I said, I'm also going to Bristol Expo this weekend with Inspired Comics, I hope some of you can stop by and see us. We'll have our new anthology, and with any luck I'll be bringing a new issue of What's the Time, Mrs Woolf? and an 8-page comic called The Bad Fairy Bakery. 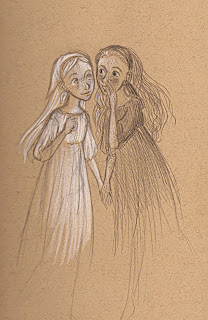 I got a brown paper sketchbook so I could try drawing with highlights as well as shading. I'm not sure if it's really for me, but I'll try to fill the book up anyway.

Snow White and Rose Red was one of my favourite fairy tales when I was little. They're usually depicted as a blonde with very pale skin and a black-haired girl with rosy cheeks. I'm fairly sure I imagine them as a blonde and a redhead because I have vague memories of playing a make-believe game based on the story with my little sister, who has fiery red hair. (As a child I had pale blonde hair.)

In other news, I now have a day job, hooray! I'm working as a waitress in a vintage tea room, so if you're in Bath you should come and find us up near the fashion museum, if you want to see me in a headscarf and bright red lipstick.
Posted by Sarah Fogg at 03:31 No comments: