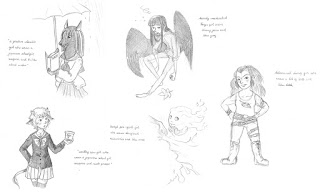 Recently (before I went to London, if you're wondering) I was in a bit of a slump and I didn't seem to be able to draw anything. Everyone always says when that happens you should just draw loads of things until it goes away, so I used that monster generator that's been going around and drew monsters for half the afternoon! I got all girls, coincidentally. It worked very well, even if I did discover that I need to work harder on diverse body types.

Also Sammy got me with a paper person! Nooooo! I should have known she had an ulterior motive when she gave me those creme eggs. 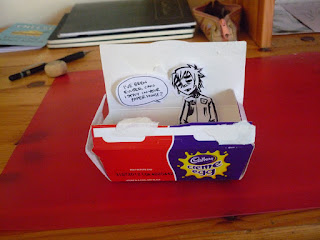 The 'paper house' is the scrapbook I made to contain some of the paper people from years gone by. I decided to start documenting my end of the game, so I've made a flicker set showing some of Sammy's previous victories.

Giant Rhinos at the British Library 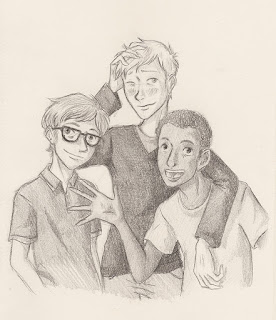 Today in 'Sarah draws fanart of comics that don't exist yet', Giant Rhinos, the best band in the world! Created by my lovely pal Sammy, who I saw yesterday in London. From left to right this is Terry (lead singer and guitarist), Carl (bassist and possibly backing vocals?) and Steve (drummer). I love these guys. I also love drawing Sammy's characters in general. My style is more detailed, but that makes it super-easy for me to draw the same attractive faces over and over. Sammy's style is more geometric, so translating her characters into my style pushes me out of my comfort zone.

Hmm... except with Carl maybe. That face is FIRMLY within my manga-influenced skill set.

Sammy drew my advice-giving house hob, Poppet, who is also the reason I am currently in the lead in the Paper People game. Sammy has kindly documented my victory in her latest blog post. 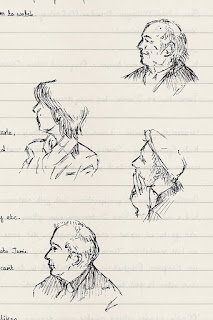 The reason we were in London was to go to The Art of Illustration, a talk at the British Library. I drew the guests on my notes. From top to bottom  - Quentin Blake, Posy Simmonds, Jamie Hewlett and Martin Rowson. They all told us about four of their favourite illustrators. It was mostly good, aside from an awkward moment in the question section, in which someone asked why none of them had picked any women. It was shrugged off and joked about in a way that suggested it wasn't important, and one of the guests joked that 'we could have picked Posy, but she's here' which kind of made it sound like Posy Simmonds is the only influential female illustrator in existence. That disappointed me.

Also we got to 'very awkwardly walk down the stairs by Jamie Hewlett in silence' as Sammy put it. Because we are the SMOOTHEST PEOPLE.
Posted by Sarah Fogg at 12:35 No comments: