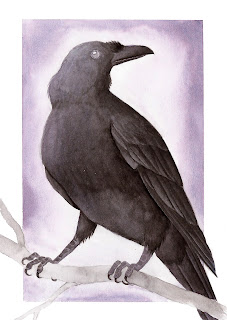 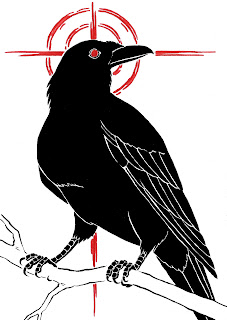 Here are some crows! The left-hand one was painted for a birthday card, the right-hand one was... well I traced the watercolour one and this is what it wanted to be I suppose. It's watching us all.
Posted by Sarah Fogg at 01:11 1 comment: 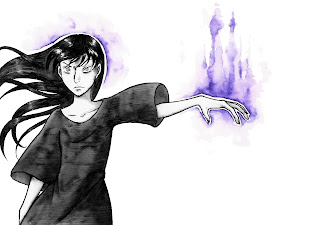 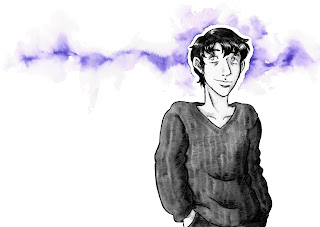 Lately I ordered some nice pen accessories, including a cartridge converter for my Rotring pen and some coloured cartridges for my cheapo £5 cartridge pens, so I drew Nettle and Spider while I was messing around testing them. I’ve never done spot colour with ink and water, it looks pretty nice I think.

Having said that, I’m not a fan of this ink. It’s a weird colour called Bilberry that can’t decide if it’s blue, purple or black. (I tweaked it in photoshop to make it more purple.) They do one called Imperial Purple that might have been a better bet. Ah well, next time.
Posted by Sarah Fogg at 00:38 No comments: 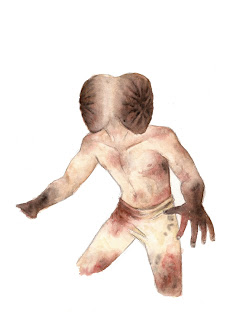 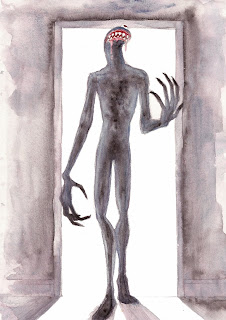 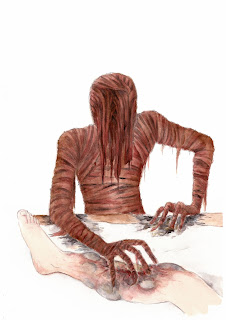 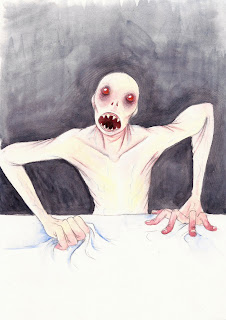 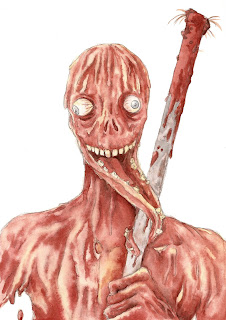 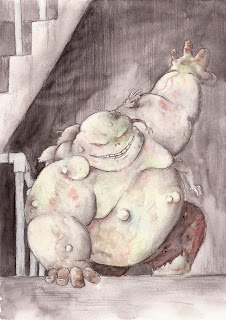 I don’t often have nightmares (in the sense of dreams that have a real feeling of terror rather than just horror imagery) but I do often see monsters in my dreams. Lately I’ve been doing watercolour sketches of some of the ones I remember, with a vague notion of using them for something later.

Starting from the top left, these appeared in my dreams as follows:

The Split-Faced Man - he didn't seem hostile, but he was covered in old blood.
The Man in the Doorway - he was impossibly tall.
The Rag Men - these were made of blood-soaked bandages and everything they touched rotted away.
The Maggot Men - there were many of these all crawling around far below me, they had bulbous eyes and thin, loose skin.
The Skinless Man - he broke his own jaw to prove we couldn't hurt him, there was no way to escape.
The Obese Demon - he was covered in tumours and extra limbs, he was slow but unstoppable.


In related news, I think I’ve finally got the hang of wet-on-wet watercolour painting.

UPDATE: Two more which aren't really monsters, but I decided the imagery was close enough to go in the set since I've had some requests for a sketchbook of these. These two are both from the same dream. 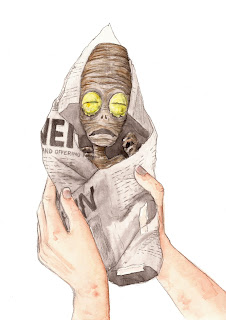 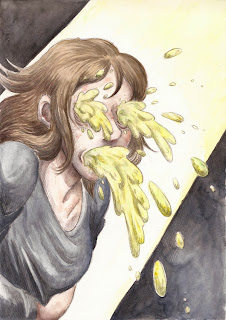 The 'baby' was found wrapped in newspaper, and you had to stay out of the searchlights. 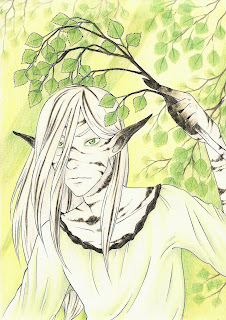 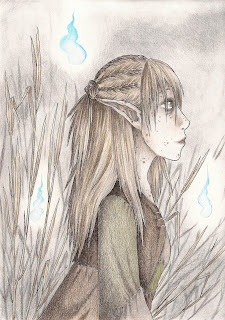 At long last, pictures of Fret and Larkspur in colour, so you can all actually see a major part of the character designs I never, ever show! Also, I’ve finally worked out how to get muted colours out of my coloured pencils, it’s only taken 18 years…

Sympathy with their environment makes elves of their type rapidly change appearance to match the plants and light where they live. Fret lives in a birch grove and therefore resembles a birch tree, Larkspur once lived in a beech forest and looked very different, but now she lives in a fetid marsh and appears sodden and mud-flecked, with hair like reeds. Fret had spent a century believing she had burned to death with her forest, and didn’t recognise her at first.
Posted by Sarah Fogg at 00:47 No comments: