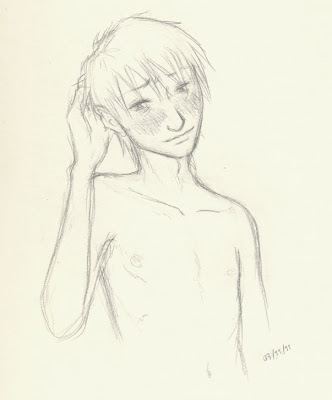 I finally got round to putting my Sketchavember pictures on flickr, like I said I was going to ages ago! I drew one of my own characters every day, starting with the some of the oldest (created when I was 12 if you can believe it) and working my way forwards. I drew in really textbook shoujo manga style back then, so it was fun to try and make them all look reasonable in my current style. I realised early on that not only did I have a bad case of Only Six Faces, but I also never drew anyone who wasn't improbably attractive. I'm still not happy with how similar a lot of them look, and they're all waaaay too pretty, but I'm confident I can make them better - before this I wasn't at all sure it could even be done.

Anyway, I've posted them all with little descriptions of who each one is and how they've changed from their original design, so hopefully you'll enjoy reading about them.

If you're curious, the boy in the picture is Asmodeus, from day three, and he's the redesign I was most proud of. He used to have HUGE eyes and a little, childlike nose. Not to mention ears that were fairy-pointed instead of deformed-pointed. Turns out all this time it was mostly blushing that made him look like himself, I'd never have guessed!
Posted by Sarah Fogg at 10:03 No comments: